A GALAXY WITHIN OUR OWN

A fossil galaxy within our own Milky Way has been recently discovered by scientists using data from the APOGEE sky survey. This fossil galaxy now accounts for approximately one third of our owns spherical halo, and is likely the remnant of a small galaxy that collided with our own some 10 billion years ago.

Ricardo Schiavon of John Moores University Liverpool commented "to find a fossil galaxy, we had to look at the detailed chemical makeup and motions of tens of thousands of stars"

This search was made possible as APOGEE takes spectra of stars in the near infra red wavelength, this allows the abundant dust within our galaxies core to be penetrated.

Just over one hundred of the thousands observed and measured showed striking chemical differences, this was the best indicator that their origin was outside the Milky Way.

As galaxies form they often collide with other galaxies and this merging leads to larger and larger galaxies like our own and M31 Andromeda.

Finally as a nod to Greek mythology scientists have named this galaxy within our own Heracles after the hero who was given the gift of immortality as the Milky Way was created. 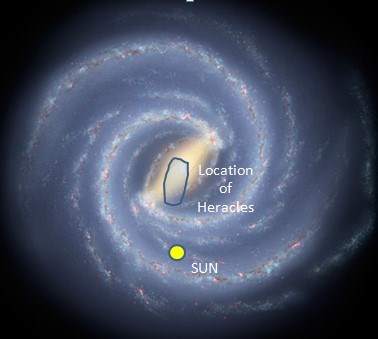